Attention Motor carriers and drivers, if you have an eligible crash that took place on or after June 1, 2017 and evidence to show that the crash was not preventable, you can participate in the Crash Preventability Demonstration Program.

As you are aware, Compliance, Safety, Accountability (CSA) scores use all crashes, regardless of  preventability.  This has been an ongoing issue in the transportation industry and the DOT has recognized that "preventability" should be considered in CSA reporting and scores.

Effective  August 1, 2017, the DOT has launched a pilot program called the Crash Preventability Program.  This program allows trucking companies to dispute certain crashes that were ruled preventable.  Following a dispute, crashes deemed non-preventable will still appear in the CSA safety measurement system, but won’t count against the carrier. 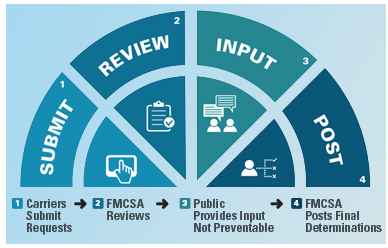 The following crash types are eligible for participation in the program: